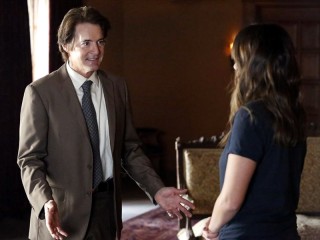 Written By:
Jeffrey Bell
Directed By:
Michael Zinberg
Our Rating:

When Skye finally meets her father face-to-face, he reveals what he believes is her destiny — beginning with what waits below the surface in the ancient temple. Coulson’s forces assault Whitehall’s facility, and Fitz and Simmons hatch a plan to destroy the underground tunnels.

IT'S S.H.I.E.L.D. VS HYDRA IN THE WAR THAT CHANGES EVERYTHING, ON THE WINTER FINALE OF "MARVEL'S AGENTS OF S.H.I.E.L.D." ON ABC

"What They Become" - Coulson and Whitehall's forces meet in an explosive confrontation that dramatically alters everyone's fates. Meanwhile, Skye discovers shocking secrets about her past, on the Winter finale of "Marvel's Agents of S.H.I.E.L.D.," TUESDAY, DECEMBER 9 (9:00-10:00 p.m., ET) on the ABC Television Network.