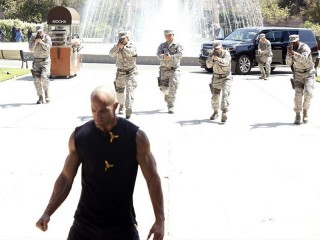 Now fugitives with limited resources and few allies, Coulson and his team engineer a daring raid on a high-security government facility that houses the advanced technology once held by S.H.I.E.L.D. But their enemy is a man who can change his body to match any material he touches.

COULSON AND HIS TEAM FIGHT TO RAISE S.H.I.E.L.D. FROM THE ASHES IN THE SEASON PREMIERE OF "MARVEL'S AGENTS OF S.H.I.E.L.D.," ON ABC

"Shadows" - Coulson and his team are now wanted fugitives with limited resources -- but that's not stopping them from keeping the world safe from powerful and unseen threats everywhere. However, with new members they hardly know, will S.H.I.E.L.D. ever be trusted again? Watch "Marvel's Agents of S.H.I.E.L.D." at its new time, TUESDAY, SEPTEMBER 23 (9:00-10:00 p.m., ET) on the ABC Television Network.