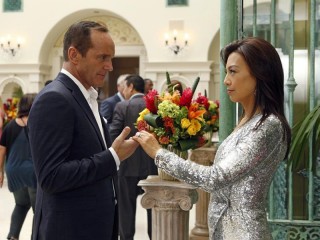 Written By:
Drew Greenberg
Directed By:
Kevin Tancharoen
Our Rating:

Agents Coulson and May go under cover at a high-society party to steal a painting that has a mysterious connection to Coulson’s ailment. But the arrival of General Talbot complicates their mission, and calls the General’s loyalties into question.

COULSON IS TARGETED BY HIS DEADLIEST ADVERSARY YET, ON "MARVEL'S AGENTS OF S.H.I.E.L.D." ON ABC

"Face My Enemy" - While on a mission to learn more about the secrets of the mysterious writing, Coulson finds himself attacked by the only person he can trust: Agent Melinda May. Meanwhile, the rest of the team is trapped in an explosive situation, and it's up to Fitz to save them -- but is he up to it? "Marvel's Agents of S.H.I.E.L.D." airs TUESDAY, OCTOBER 14 (9:00-10:00 p.m., ET) on the ABC Television Network.