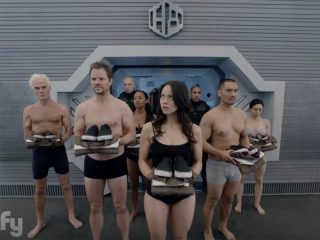 One of our favorite new shows from last year is flying back to our screens this summer! This week Syfy Channel released the first look at Season Two of Dark Matter, from former Stargate producers Joseph Mallozzi and Paul Mullie.

Take a look at the 30-second spot below.

The new season picks up in the wake of the stunning first season finale, which ended on the reveal of the mole inside the Raza crew: one of their own who has turned against the team and handed them over to the powerful Galactic Authority.

Dark Matter returns Friday, July 1 at 10/9c on Syfy Channel in the U.S. Keep up with the show all season long with SciFi Stream’s Dark Matter series guide!