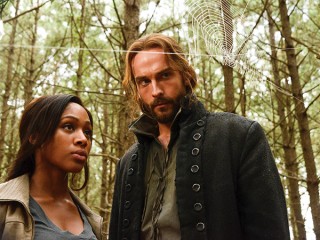 All good things must come to an end, and this week FOX announced the broadcast date for the final episode of Sleepy Hollow‘s first season.

Season One of one of this season’s biggest new hits will take its final bow on Monday, January 20 at a special time, 8/7c. It will be followed by the second season premiere of FOX’s spring hit The Following, which takes over the Monday 9/8c time slot that night.

Almost Human is likely to stay in its Monday 8/7c time slot after Sleepy Hollow bows out for the year, airing as The Following‘s regular lead-in. The sci-fi show starring Karl Urban and Michael Ealy premieres on November 17 and 18 (story).

Despite Sleepy Hollow‘s big success this fall, FOX is sticking to its original plan of making the show a limited-run event for the fall schedule. It has already been renewed for a second season, likely to also be 13-episodes in length.

Sleepy Hollow will return next fall.