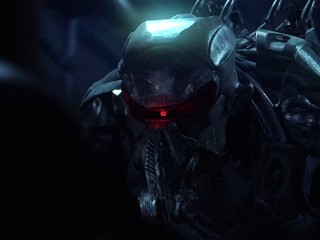 The Battlestar Galactica prequel pilot will finally get its day in the sun, Syfy Channel has announced.

Battlestar Galactica: Blood & Chrome will air as a 2-hour movie on the U.S. cable network on February 10 (9/8c). Fans have already seen the pilot as a Web series on the Machinima Prime YouTube channel (story) — where it garnered a reported 8 million views — but the broadcast version will be cut together as a seamless movie and include a bit of additional material.

A DVD and Blu-ray release will follow on February 19, featuring the full film cut, deleted scenes, and other bonus features. Pre-order it now at Amazon!

Blood & Chrome is set in the early years of the first war between the Cylons and the Twelve Colonies, when William Adama (Luke Pasqualino) is a brash young Viper pilot and the Battlestar fleet is in its prime. 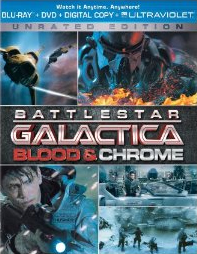 The pilot has had a long and somewhat troubled development history. Originally commissioned as a Web series, Syfy decided to consider it as a pilot for a full-on television series after the cancellation of Caprica. Months went by with no word, and in early 2011 a leaked teaser trailer filled with visual effects made fandom’s collective jaw drop.

The trailer was pulled, and within days Syfy announced it wasn’t giving the show the go-ahead to go to series.

It took another eight months before Blood & Chrome debuted online at Machinima Prime — with little warning or network promotion behind it.

Nevertheless, Syfy has said that if Blood & Chrome performed well, the door is open to future productions.