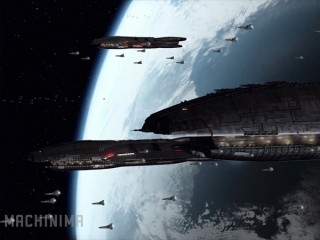 The long-awaited movie makes its debut online today, with the first two Web installments at Machinima.

The series is set 10 years into the first war between the Twelve Colonies and the Cylons, who were created by human beings but have turned against them. In the series opener a cocky young pilot named William Adama arrives on board the Battlestar Galactica for his first assignment.

Two new installments of the 10-part series will be released each Friday for the next month.

Blood & Chrome will then will be broadcast in its entirety as a 2-hour movie on Syfy Channel early next year, followed by a DVD and Blu-ray

So, what do you think? Is the return of Battlestar living up to the hype so far?