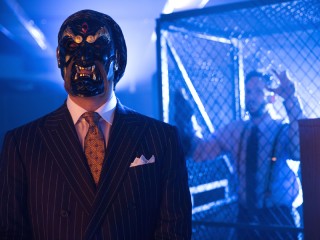 Written By:
John Stephens
Directed By:
Paul Edwards
Our Rating:

Gordon and Bullock investigate what appears to be a deadly fight club, where job applicants are expected to fight for a position at a financial firm. Bruce begins school and must learn how to deal with a bully.

GORDON AND BULLOCK INVESTIGATE A DEADLY FIGHT CLUB ON AN ALL-NEW "GOTHAM" MONDAY, NOVEMBER 10, ON FOX

Gordon and Bullock investigate a Gothamite who runs a deadly fight club for candidates applying for a job at his financial firm. Meanwhile, Bruce returns to school and gets a visit from a new friend in the all-new "The Mask" episode of GOTHAM airing Monday, Nov. 10 (8:00-9:00 PM ET/PT) on FOX. (GTH-108) (TV-14 D, L, V)