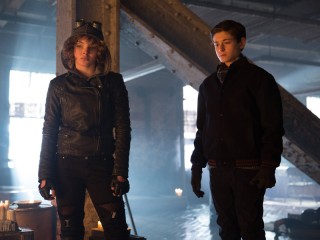 Written By:
Ken Woodruff
Directed By:
Eagle Egilsson
Our Rating:

Gordon and Bullock investigate the cold case of a serial killer who targets young women in Gotham. Fish puts things in motion to prepare for her escape, and Bruce decides to confront Alfred’s friend on his own.

A COLD CASE IS RE-OPENED ON AN ALL-NEW "GOTHAM" MONDAY, APRIL 13, ON FOX

Gordon and Bullock investigate a cold case involving the Ogre, a serial killer who targets young women in Gotham City. Meanwhile, Fish plots her escape from the Dollmaker, and Bruce and Selina confront Reggie in the all new "Beasts of Prey" episode of GOTHAM airing Monday, April 13 (8:00-9:00 ET/PT) on FOX. (GTH-119) (TV-14 L, S, V)