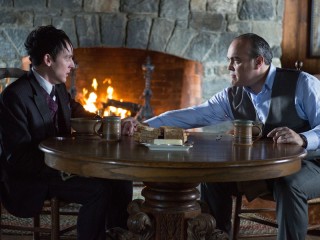 Written By:
John Stephens
Directed By:
John Behring
Our Rating:

After Fish rats out Penguin to Maroni, the Don takes him to a remote cabin outside the city to test his loyalty. Gordon and Bullock hunt for a killer who targets victims with severe phobias, and Edward Nigma finds himself suspended.

FISH MOONEY TAKES BACK HER POWER ON AN ALL-NEW "GOTHAM" MONDAY, FEBRUARY 2, ON FOX

Fish Mooney reveals a secret of Oswald Cobblepot's, prompting Maroni to take him on a trip to test his loyalty. Meanwhile, Gordon and Bullock hunt down a killer who targets victims with severe phobias and Bruce Wayne confronts Gordon for failing to make progress on his parents' murder case in the all new "The Fearsome Dr. Crane" episode of GOTHAM airing Monday, Feb. 2 (8:00-9:00 PM ET/PT) on FOX. (GTH-114) (TV-14 D, L, V)