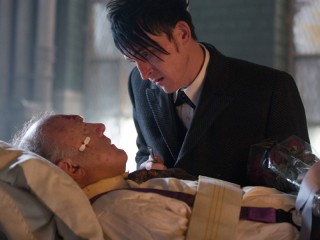 Gordon and Bullock find themselves in the middle of a war for Gotham after Jim interrupts Penguin’s endgame, and Fish returns to lay her claim to the criminal underworld. Meanwhile Barbara agrees to counseling with Dr. Thompkins, and Bruce scours the mansion for a secret he believes was hidden by his father.

THE BATTLE BETWEEN GOOD AND EVIL RAGES ON THE SEASON FINALE OF "GOTHAM" MONDAY, MAY 4, ON FOX

As Gotham City's gang war reaches its boiling point, Fish Mooney goes head-to-head with Maroni and Penguin in an attempt to re-stake her claim on the city. Meanwhile, Barbara and Leslie Thompkins are brought together after recent events, and Bruce searches Wayne Manor for any hints that his father might have left behind in the all new "All Happy Families Are Alike" Season Finale episode of GOTHAM airing Monday, May 4 (8:00-9:00 ET/PT) on FOX. (GTH-122) (TV-14 D, L, V)