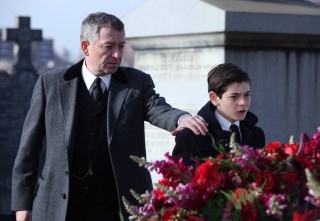 Gotham Police Detective James Gordon tries to make a difference in the corrupt city, where a young boy named Bruce Wayne has been orphaned by the murder of his parents.

THE ORIGIN STORIES BEGIN! ON THE SERIES PREMIERE OF "GOTHAM" MONDAY, SEPTEMBER 22, ON FOX

GOTHAM traces the rise of the great DC Comics Super-Villains and vigilantes, revealing an entirely new chapter that has never been told. From executive producer/writer Bruno Heller ("The Mentalist," "Rome") and starring Ben McKenzie ("Southland," "The O.C."), Jada Pinkett Smith ("Hawthorne," "Collateral") and Donal Logue ("Vikings," "Sons of Anarchy"), GOTHAM follows one cop, destined for greatness, as he navigates a dangerously corrupt city teetering between good and evil, and chronicles the birth of one of the most popular super heroes of our time in the all-new "Pilot" Series Premiere episode of GOTHAM airing Monday, Sept. 22 (8:00-9:00 PM ET/PT) on FOX. (GTH-101) (TV-14 D, L, V)