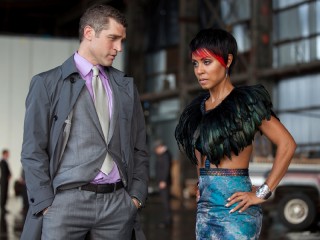 Written By:
Bruno Heller
Directed By:
Rob Bailey
Our Rating:

The forces of Gotham’s two largest crime families go up against each other after Fish Mooney learns of Cobblepot’s true fate, while Falcone sends a hit-man to eliminate Gordon — in the middle of the police precinct.

A NEW LEADER WILL RISE IN GOTHAM CITY ON AN ALL-NEW "GOTHAM" MONDAY, NOVEMBER 3, ON FOX

As violence between Maroni (guest star David Zayas) and Falcone continues to escalate, Penguin reveals a new component of his manipulative strategy, forcing Gordon to deal with the consequences of his decision to spare Penguin's life in the all-new "Penguin's Umbrella" episode of GOTHAM airing Monday, Nov. 3 (8:00-9:00 PM ET/PT) on FOX. (GTH-107) (TV-14 D, L, V)