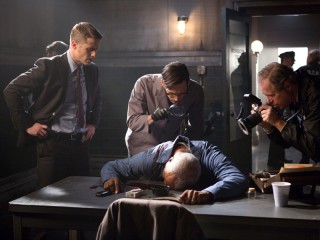 Written By:
Megan Mostyn-Brown
Directed By:
Wendey Stanzler
Our Rating:

Bullock and Gordon conduct an internal investigation when a witness is murdered inside the walls of the GCPD precinct. Fish swears revenge as she suffers at the hands of Falcone’s interrogator following her transgression, and Bruce Wayne tries to locate Selina.

THE SUDDEN DEATH OF A KEY WITNESS HAS GORDON SUSPICIOUS ON AN ALL-NEW "GOTHAM" MONDAY, JANUARY 26, ON FOX

When the key witness in a homicide ends up dead while being held for questioning by the police, Gordon suspects that it's an inside job and looks to an old friend for information. Meanwhile, Oswald Cobblepot takes control of one of Fish Mooney's prized possessions, as she gets a gets a small taste of her own medicine in the all new "Welcome Back, Jim Gordon" episode of GOTHAM airing Monday, Jan. 26 (8:00-9:00 PM ET/PT) on FOX. (GTH-113) (TV-14 D, L, V)