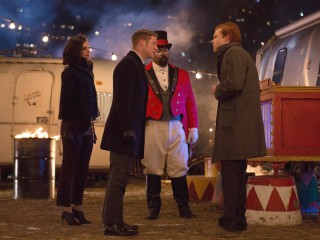 Written By:
Bruno Heller
Directed By:
Jeffrey Hunt
Our Rating:

Jim and Leslie’s visit to the circus turns up a dead performer, casting suspicion on her son and the other performers. Fish attempts to consolidate her power inside the prison, while Barbara returns to Gotham. Meanwhile, Bruce prepares to meet with the board of Wayne Enterprises for the first time.

LIFE IN GOTHAM BECOMES A THREE-RING CIRCUS ON AN ALL-NEW "GOTHAM" MONDAY, FEBRUARY 16, ON FOX

Gordon takes Dr. Leslie Thompkins (guest star Morena Baccarin) to the circus, but the day turns quickly when the circus comes under attack. Then, Falcone enlists Butch Gilzean to help Penguin with the night club, while Fish Mooney is otherwise occupied. Also, Bruce Wayne schedules a meeting with the Wayne Enterprises board in the all new "The Blind Fortune Teller" episode of GOTHAM airing Monday, Feb. 16 (8:00-9:00 ET/PT) on FOX. (GTH-116) (TV-14 D, L, V)