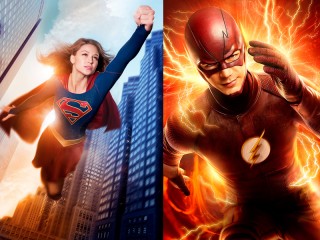 The odds of a crossover between Supergirl and Arrow or The Flash looked slim this season, but network execs and DC Comics have struck a deal: The Flash himself will make a crossover appearance on CBS’s Supergirl on March 28.

Broadcasters CBS and The CW share the same parent company (Viacom), and the three DC shows — as well as newcomer Legends of Tomorrow — share the same production team, headed by Greg Berlanti and Andrew Kreisberg.

As the season began last fall CBS executives sounded reluctant about any crossover, understandably wanting to give their new superhero show some time to find its own legs first. Supergirl debuted to nearly 13 million viewers in October, and has settled into a weekly average of 7 to 8 million (Live + Same Day).

While there are no plans yet for a reciprocal visit, it does firmly establish that the four DC shows from Berlanti’s production team are set in the same universe — despite the fact that they air on different networks. (The CW made a similar cross-network deal with NBC earlier this season, securing the rights to use the Constantine character on Arrow — though, in that case, NBC’s Constantine had already been cancelled.)

Supergirl airs Mondays on CBS, and The Flash Tuesdays on The CW.

UPDATE! Grant Gustin has posted the title page of the episode’s script on Instagram. The title of episode #118 is “Worlds Finest,” with a story by Greg Berlanti and teleplay by Andrew Kreisberg and Michael Grassi.

“World’s Finest” was a decades-long comic book line from DC. The lack of an apostrophe in the episode’s title might indicate a crossover not only between the two shows but between two parallel worlds (a story device featured this season on The Flash). If so, that might indicate that Kara and Barry are actually from two different versions of Earth.