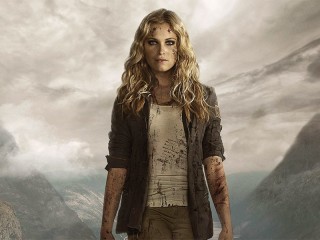 One of our favorite science fiction shows on the broadcast networks is finally making its big return at mid-season, and now we have a date — and new info on Season Three of The 100.

The series returns to The CW on Thursday, January 21 at 9 p.m. (8 Central), airing after the new DC superhero adventure Legends of Tomorrow.

Here’s how the network teases the story to come:

For two seasons, the refugees of THE 100 sent to Earth have been at war. First with themselves, then with the Grounders, and finally with Mount Weather. Many have lost their lives along the way. All have lost their innocence. They have learned the hard way that in the fight for survival, there are no heroes and no villains. There is only the living and the dead.

But now the war is over. The battle against Mount Weather has been won. The prisoners have returned home to a world seemingly at peace, but can they find peace within themselves after what they had to do to escape? And is there more to life than just surviving? Unfortunately, their newfound sense of normalcy will be short-lived, and their lives will be changed forever, as threats both old and new test their loyalties, push them past their limits, and make them question what it truly means to be human.

The move to Thursdays is a first for the show, which aired with Arrow on Wednesdays last season (airing in both the fall and spring). This year The Vampire Diaries and The Originals will move to Fridays to make room for The 100 and the network’s expansion of the DC television universe.

Head over to SciFi Stream’s The 100 show guide, and stay tuned for lots of updates for the new season!