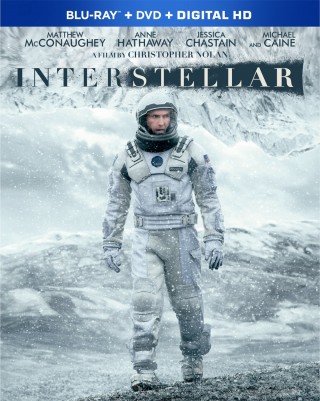 “Once you’re a parent, you’re the ghost of your children’s future …”

Christopher Nolan’s science fiction masterpiece Interstellar arrives today on Blu-ray and DVD. It’s a stunning film — a moving story, beautiful performances, and awe-inspiring visuals. If for some incredible reason you haven’t seen it, now is the time.

stars Matthew McConaughey as Cooper, once a NASA pilot who turned farmer after a Dust Bowl-like crisis made space exploration evidently unnecessary. As one character puts it, the world didn’t run out of planes and television sets — it ran out of food. More and more crops are failing every year, and after discovering a secret NASA station Cooper learns that scientists believe things will only get worse. Okra is gone. Corn is dying. Cooper’s daughter’s generation will be the last to survive on the Earth.

It’s a pretty basic set-up for a sci-fi film that will have courageous astronauts look to space for the salvation of the human race. What makes Interstellar profoundly different from the likes of Armageddon or other mass disaster pics like The Day After Tomorrow is heart and family. Cooper is a widower and father of two: Tom (Timothée Chalamet, Casey Affleck) is destined to take over the farm when Cooper leaves, and Murph (Mackenzie Foy, Jessica Chastain) is a precocious 10-year-old who will one day grow into a brilliant scientist.

It’s not just that Cooper has to leave, joining a deep-space mission to find a new planet for humans to live on (alongside NASA scientist Amelia Brand, played by the sure-footed Anne Hathaway). And it’s not just that he has to say goodbye to his daughter who doesn’t want him to go, knowing that he may never return. It’s that there is no “good” farewell between them. Cooper has to make a choice where the only way to save his family is to make his daughter hate him for much of her life. 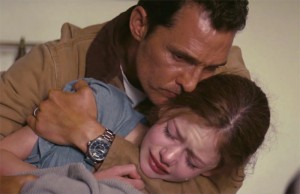 And it’s not just that — it’s that this deeply profound relationship between father and daughter, a relationship of love and of hate — is itself destined to be the lynchpin of the story and its resolution. I don’t think it is much of a spoiler to put it like this: Interstellar isn’t so much a story about a father leaving his family to save the world; it’s the story of a father’s love being the thing that saves the world. Equally powerful to the forces of time and gravity is the force of love.

The script, from Nolan and brother Jonathan (Person of Interest), is packed with heart (and heartbreak). Many long-time fans of the science fiction genre (like myself) also have a great interest in the real-world space program, which adds layers of resonance to the story that the Nolans tell. Before discovering NASA’s continued existence Cooper looks out over his dusty farm and laments, “We used to look up at the sky and wonder at our place in the stars. Now we just look down, and worry about our place in the dirt.” There’s something real in there, something that transcends this particular tale and reaches to the heart of what it is to be human — to look up, to think beyond ourselves, to hope for a time when we might be better.

Interstellar excels at this sort of reflection, interwoven with the emotion of strained family bonds, the genre’s high concepts of time dilation (“We have to treat time as a limited resource, like water and oxygen”) and multiple-dimensional beings, the spectacle of distant alien worlds, and a hint of religious reflection. The stakes, therefore, aren’t just big for the characters. The stakes are big for the filmmakers, who have given themselves a monumental task in properly managing these ideas without allowing one to fall out of balance or become clichéd. 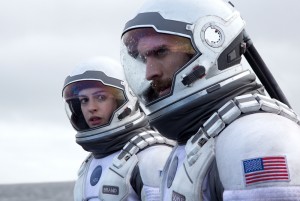 Nolan’s film is a real masterpiece because it sets such a high bar and yet succeeds on every level. It is relatable and tactile, a non-futurist space drama that perfectly marries the bucolic with the alien, and the wonder of technology and interstellar travel with the emotion of separation, of loss, and of hope for some kind of survival. This is certainly the best science fiction film in recent memory, rising (and I don’t say this casually) to the level of the likes of The Matrix, Blade Runner, and 2001. Interstellar accomplishes the best of what science fiction is able to achieve, and should be reckoned as a landmark for this generation.

The 3-disc combo package from Paramount includes a Blu-ray disc with the feature film and a second disc of bonus features, a DVD edition of the film, and a code for a digital HD download (Ultraviolet). A limited number also feature an authentic, 70mm IMAX film cell — a pretty cool bonus for collectors. (Mine is Coop and Murph standing next to the family truck, when she asks him why she was named after Murphy’s Law.) Navigation menus are minimalist.

There is also a 1-disc DVD edition available, which won’t include the bonus features described below.

The film’s visuals really shine. This is the sort of film that makes you glad to live in an HD-world, where the full-realized alien worlds and interstellar phenomenon — notably “Gargantua,” a black hole in a distant solar system, and the spherical wormhole that brings the Endurance to it. (Real-world scientists were pretty excited by the fact that a Hollywood studio had the money necessary to create these highly realistic models, which confirmed much of what scientists believe such phenomena would look like.) 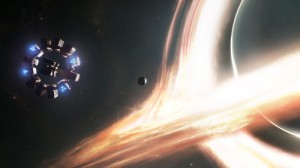 “The Science of Interstellar.” A long-form documentary (just under 50 minutes) explores — as the name suggests — the real science underlying the fantastical story. This is an extended cut of a broadcast special. Narrated by McConaughey, the piece features science advisor and executive producer Kip Thorne (whose work helped inspired the film) and explores topics such as planets in distant systems, space-time, wormholes, black holes, time travel, NASA technology, and more. What this piece does best is demonstrate how the principles of astrophysics don’t merely play a part in the story but give it structure and momentum.

A stand-out here is “The Ranger and the Lander,” which follows the production design, construction, and photography with a focus on the two ships but multi-dimensional attention to camera work, lighting, computer effects, and the film’s admirably copious use of on-set practical effects (including gimbaled set pieces).

Another is “Celestial Landmarks,” which explores the real-world astrophysics that Thorne brought to the film — and hints at the new discoveries made by producing accurate CG models of the wormhole and the black hole.

Trailers. The teaser and three theatrical trailers are included.

There are few obvious omissions from the package. Perhaps the most significant would be the much-loved audio commentary; Christopher and Jonathan Nolan are such science fiction visionaries that a feature-length commentary from them really would have made this release a perfectly complete package. And as terrific as the featurettes are at exploring the film-making processes, the science, and the technology, there isn’t a lot of time spent on the themes of family, love, and sacrifice — the beating heart of this film.

Thanks to Paramount for providing a review copy.