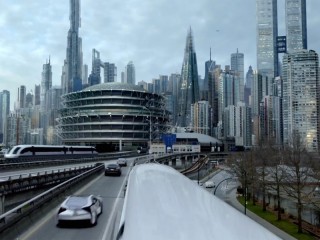 We’re just days away from one of the new series premieres that we are most excited about: FOX’s Almost Human, which starts this Sunday night after the football game and continues Monday at 8/7c.

Today the network released one last trailer for the show, this one a movie-style trailer that runs more than two full minutes. Watch it below!

Almost Human is a futuristic cop drama set in Los Angeles in the year 2048. Returning to active duty following a traumatic incident, Detective John Kennex (Karl Urban) is forced to partner with a “synthetic” — an android lifeform — and is eventually partnered with the rather unique Dorian (Michael Ealy), who _ … unlike the new top-of-the-line models that are now widespread.

The new trailer features mostly footage that we’ve seen already, but with a bit of fascinating new material that shows off some futuristic tech, and a confrontation in what looks like a night club.

The second new video below runs two and a half minutes, and includes cast members talking about the series.

Check ’em out, then head over to SciFi Stream’s Almost Human series guide for more about the new show! You can also watch an 8-minute preview of the first episode.

Are you excited about Almost Human?