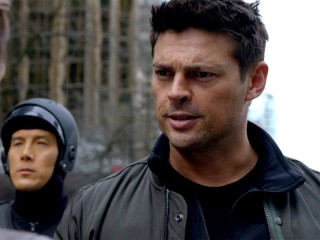 We’re less than three weeks away from the debut of what might be the new fall show that we’ve most been looking forward to: Almost Human, a police drama set 35 years in the future.

This week FOX has released a long teaser for the series premiere, in the form of eight minutes of the first episode. Watch it here, courtesy of Hulu — then visit our Almost Human series guide for lots more about the show!

Karl Urban (Star Trek) stars as Detective John Kennex, who is partnered with a “synthetic” — an android named Dorian (Michael Ealy) — in a futuristic Los Angeles.

Almost Human premieres on Sunday, November 17 before settling into its regular time slot on Mondays at 8/7c.