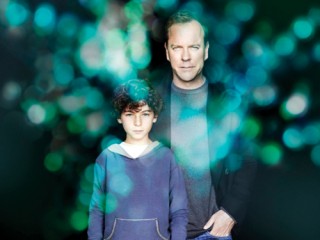 If you thought fantasy / sci-fi newcomers like Once Upon A Time, Grimm, and Terra Nova are fun additions to your weekly genre line-up, just wait for mid-season. FOX is ready to debut two major new dramas next month.

ALCATRAZ stars Sarah Jones (Sons of Anarchy), Sam O’Neill (Jurassic Park), and Jorge Garcia (LOST) in a story about a team of investigators who track down dangerous criminals who disappeared from the legendary prison island 50 years ago … and are now mysteriously resurfacing. Produced by J.J. Abrams, the show premieres with a 2-hour event on January 16 (8/7c), and will air Monday nights at 9/8c — taking over Terra Nova‘s time slot when the dino show goes into hibernation until next season (renewal pending).

TOUCH stars Kiefer Sutherland (24) as the father of an autistic boy who has the ability to see patterns no one else can see in the world around him, allowing him even to predict the future. The new series comes from writer and executive producer Tim Kring, the creator of Heroes. It will have an early preview of the pilot on Wednesday, January 25 (9/8c), and then premiere in its regular time slot on Monday, March 19 (9/8c).

Season One will be comprised of 13 episodes.

We’ll be officially launching SciFi Stream’s episode guides for these shows once we have a few episode titles queued up!

Also on our radar for mid-season is AWAKE (NBC – Date TBA), which has a fantastic trailer and which may or may not end up with any science fiction elements. (If it does, we’ll add it to the site.)