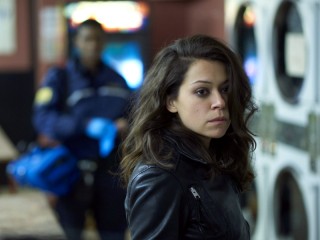 The Clone Club is back next week when the fourth season of Orphan Black makes its premiere on BBC America and Canada’s SPACE!

This week the networks have pulled back the curtain on the season premiere by releasing the first four minutes of the episode, titled “The Collapse of Nature.” (Watch it below.) The series moves from Saturdays to Thursday nights this season when it premieres on April 14 (10/9c).

After two months of respite, Sarah’s hard-won refuge in Iceland is shattered by a Neolution attack. Once again forced to flee, she realizes no matter how far her family runs it will never be far enough.

Stick with SciFiStream for more on Orphan Black Season Four, and keep up with the show each week with our episode guide.