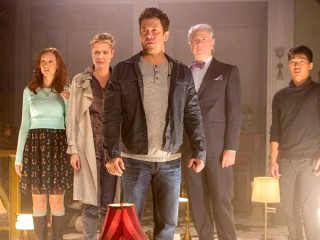 Happy Holidays! It’s Christmas week and that means nearly all of our favorite science fiction and fantasy shows are on hiatus until after the New Year arrives.

But we do have a handful of new episodes this week, including the big Doctor Who Christmas special — featuring Alex Kingston returning as Professor River Song, sharing the screen for the first time with Twelfth Doctor Peter Capaldi.

Then on Sunday it’s the season finale of TNT’s supernatural adventure series The Librarians this weekend, and the team is fighting to stop the evil Prospero once and for all. The show was just picked up for a third season, and will be back next fall.

While you’re enjoying a little holiday respite from the usual TV fare, don’t forget that Marvel’s Jessica Jones has hit Netflix! The show is getting great buzz (and we’ve really enjoyed it) and stars Krysten Ritter (Breaking Bad) and David Tennant (Doctor Who). 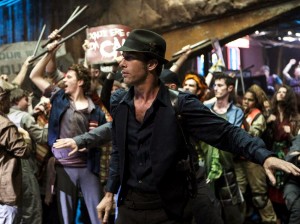 THE EXPANSE
Syfy, 10/9c
“Remember the Cant.” Holden and crew are taken prisoner and begin to turn on one another; Miller deals with rioters; Avasarala plays politics.
SATURDAY 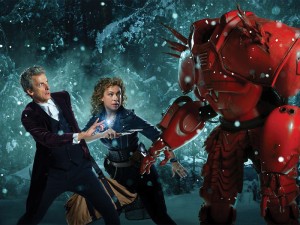 DOCTOR WHO
BBC America, 9/8c
“The Husbands of River Song.” When a crashed spaceship calls upon the Doctor for help, he finds himself recruited into River Song’s squad and hurled into a fast and frantic chase across the galaxy. King Hydroflax is furious, and his giant robot bodyguard is out of control and coming for them all! Will Nardole survive? And when will River Song work out who the Doctor is?
SUNDAY

THE LIBRARIANS
TNT, 8/7c – SEASON FINALE!
“And the Final Curtain.” The Librarians discover that Prospero’s renewed magic is wreaking havoc with the technology of the world. He is recreating an idyllic forest utopia, whether we want one or not. In order to stop him, Flynn and Baird must travel back to 1611, while the rest of the team battles Prospero in the present. Little do they realize that they can only defeat Prospero in each time by finding a way to work together — separated by five centuries.