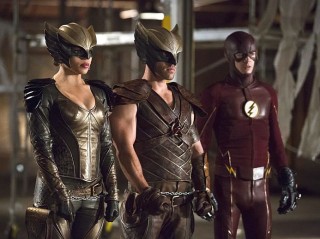 After last week’s epic trailer we’re more than ready for DC’s Legends of Tomorrow, which starts in January. But before Rip Hunter assembles a team of heroes and anti-heroes, they need to know what they are fighting for.

That’s where this week’s big crossover event on The CW comes in. The 2-night event sets up the new spin-off by introducing DC villain Vandal Savage (guest star Casper Crump), as well as Carter Hall / Hawkman (Falk Hentschel) and Hawkgirl (Ciara Renée). It starts Tuesday on The Flash, and continues Wednesday on Arrow.

Also this week: The Doctor is seeing red when he returns to Gallifrey in Doctor Who‘s ninth season finale, and Dash and the precogs may be headed back to the milk bath on the season (and likely series) finale of Minority Report. Supergirl squares off against the military android Red Tornado, and Bruce Wayne is captured by a secret society on the mid-season finale of Gotham. 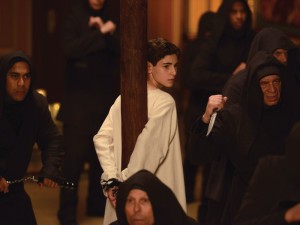 GOTHAM
FOX, 8/7c – MID-SEASON FINALE!
“Worse Than A Crime.” When Bruce Wayne is kidnapped, Gordon must look to some unlikely and dangerous allies for help. It is a battle of the villains, and not everyone makes it out alive. 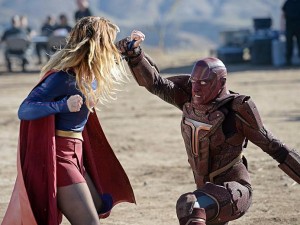 SUPERGIRL
CBS, 8/7c
“Red Faced.” Personal and professional stress get the better of Kara when she goes too far during a training exercise against Red Tornado, a military cyborg commissioned by Lucy Lane’s father, General Sam Lane. Also, Cat’s tough exterior is shaken by a visit from her judgmental mother, Katherine, and Alex enlists Winn to look into her father’s mysterious death. 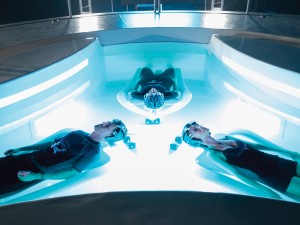 MINORITY REPORT
FOX, 9/8c – SEASON FINALE!
“Everybody Runs.” The precogs and Vega must come together to thwart a chemical attack by Memento Mori, meanwhile Blomfeld is determined to get the precogs back in the milk bath.
TUESDAY 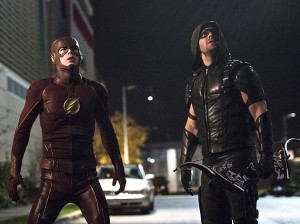 THE FLASH
The CW, 8/7c
“Legends of Today.” Vandal Savage arrives in Central City and sets his sights on Kendra Saunders. After Vandal attacks Kendra and Cisco, they turn to Barry for help. Realizing how dangerous Vandal is, Barry takes Kendra to Star City and asks Oliver and team to hide her until he can figure out how to stop Vandal. Meanwhile, Harrison develops a serum to make Barry run faster and asks Jay to test it out. 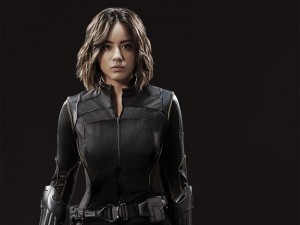 AGENTS OF S.H.I.E.L.D.
ABC, 9/8c
“Closure.” Ward’s campaign for revenge brings the S.H.I.E.L.D. team to their knees, and Coulson proves he will do anything to settle the score.
WEDNESDAY 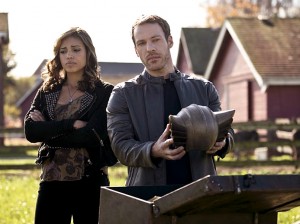 ARROW
The CW, 8/7c
“Legends of Yesterday.” Oliver and Barry Allen take Kendra Saunders and Carter Hall to a remote location to keep them hidden from Vandal Savage while they figure out how to defeat him. Malcolm arranges a meeting between Vandal, Green Arrow and The Flash that doesn’t go as planned. Meanwhile, Felicity, Thea, Diggle and Laurel work with Team Flash to come up with a weapon powerful enough to destroy Vandal Savage.
THURSDAY 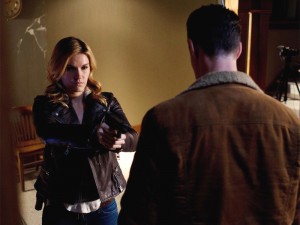 HAVEN
Syfy, 10/9c
“Blind Spot.” Audrey and Nathan try to regain control of the police station while a mysterious killer leaves a wake of bodies.
FRIDAY 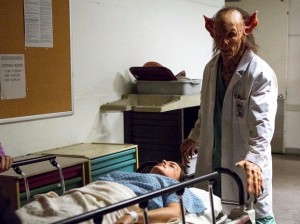 GRIMM
NBC, 9/8c
“The Rat King.” Nick and Hank are called to the scene when three Wesen go out on a hunt at a local dump and get more than they bargained for when two turn up dead after they encounter the mythical Rat King. Meanwhile, a very badly wounded Trubel is taken to the hospital and Nick finally meets Meisner.
SATURDAY 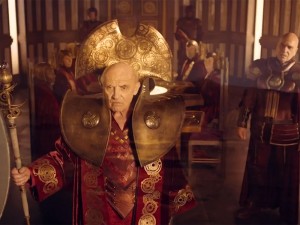 DOCTOR WHO
BBC America, 9/8c – SEASON FINALE!
“Hell Bent.” If you took everything from him, betrayed him, trapped him, and broke both his hearts … how far might the Doctor go? Returning to Gallifrey, the Doctor faces the Time Lords in a struggle that will take him to the end of time itself. Who is the Hybrid? And what is the Doctor’s confession?
SUNDAY 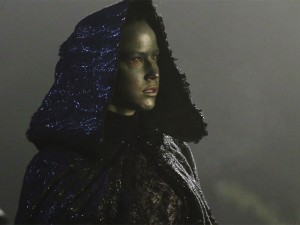 ONCE UPON A TIME
ABC, 8/7c – MID-SEASON FINALE!
“Swan Song.” The dark siege of Storybrooke is underway as all of the resurrected Dark Ones target a living soul for sacrifice so that they can return to the realm of the living. Emma, however, refuses to give up, knowing that she is responsible for righting all the poor choices she made as Dark One. In a Fairy Tale Land flashback, the Evil Queen tests Hook’s mettle by forcing him to confront a demon from his past before contracting him to dispatch one from hers.

THE LIBRARIANS
TNT, 8/7c
“And the Image of Image.” When people begin suffering the effects of accidents and sins in which they have not actually been involved, the team tracks the connection to the perpetually young Dorian Gray, whose magic now works on selfies.