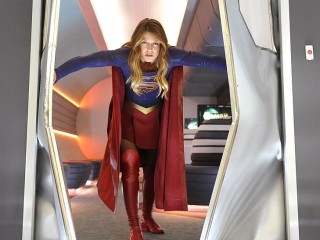 Supergirl has legs on CBS, where the network has just ordered seven more episodes of the freshman superhero drama.

That brings the first season to 20 episodes — a few shy of other network dramas, due to Supergirl‘s late October premiere date.

The DC Comics show from producers Greg Berlanti, Ali Adler, and Andrew Kreisberg is currently averaging 11.24 million viewers (through five episodes), according to CBS, with a 2.8 rating among adults ages 18 to 49 and a 3.5 rating in adults 25 to 54. Melissa Benoist stars in the titular role, along with Mehcad Brooks, Chyler Leigh, Jeremy Jordan, David Harewood, and Calista Flockhart.

CBS has now given back orders to all four of its freshman dramas, including Limitless, Code Black, and Life in Pieces.

Supergirl airs Mondays at 8/7c on CBS. Keep up with the show with our Supergirl series guide!