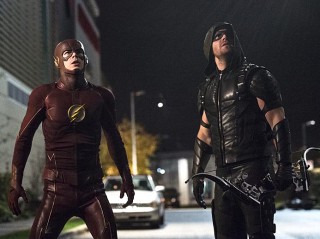 Barry and his friends travel to Star City for help protecting Kendra Saunders from an immortal assassin named Vandal Savage, only to learn that she must rediscover her own secret past. Meanwhile, Wells tries to convince Jay Garrick to test a drug that might boost the Flash’s speed.

PART ONE OF THE EPIC CROSSOVER WITH "ARROW"

In its second major crossover event with "Arrow," Vandal Savage (guest star Casper Crump) arrives in Central City and sets his sights on Kendra Saunders (guest star Ciara Renée). After Vandal attacks Kendra and Cisco (Carlos Valdes), they turn to Barry (Grant Gustin) for help. Realizing how dangerous Vandal is, Barry takes Kendra to Star City and asks Oliver and team to hide her until he can figure out how to stop Vandal. However, things quickly go from bad to worse when a man with wings AKA Hawkman (guest star Falk Hentschel) shows up and flies off with Kendra. Meanwhile, Harrison (Tom Cavanagh) develops a serum to make Barry run faster and asks Jay (guest star Teddy Sears) to test it out.