Browse: Home / On Hiatus / The Orville / Season One / Mad Idolatry 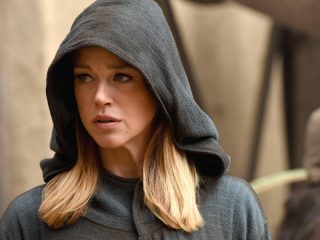 Written By:
Seth MacFarlane
Directed By:
Brannon Braga
Our Rating:

After the Orville encounters a planet from another universe that periodically appears in our own, Kelly renders aid to an injured girl and winds up honored by the alien civilization as a god. Meanwhile, Ed and Kelly consider renewing their romantic relationship.

ED AND THE CREW DISCOVER A PLANET FROM ANOTHER UNIVERSE ON THE ALL-NEW SEASON FINALE OF "THE ORVILLE" THURSDAY, DECEMBER 7, ON FOX

Ed and Kelly seriously reconsider getting back together. However, while Kelley is on a mission with Isaac and Gordon to investigate the origins of an uncharted star, they suddenly crash-land on a planet from another universe. Kelly then makes a decision with unforeseen long-term consequences for the planet, putting Ed in a difficult position in the all-new "Mad Idolatry" season finale episode of THE ORVILLE airing Thursday, Dec. 7 (9:01-10:00 PM ET) on FOX. (ORV-113) (TV-14 L, S, V)