Browse: Home / On Hiatus / The Orville / Season One / Old Wounds 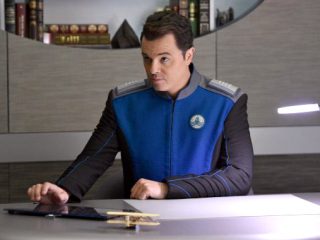 Written By:
Seth MacFarlane
Directed By:
Jon Favreau
Our Rating:

One year after his marriage fell apart Ed Mercer’s dream comes true when he is assigned to captain a Union exploratory vessel — only to find his ex-wife, Kelly, assigned as his First Officer. On the ship’s first mission, they must stop the menacing Krill from stealing time manipulation technology from an advanced research station.

JOURNEY TO 2417 FOR A NEW SPACE ADVENTURE FROM SETH MacFARLANE ON THE ALL-NEW, SPECIAL SERIES PREMIERE OF "THE ORVILLE" SUNDAY, SEPTEMBER 10, ON FOX

From Emmy Award-winning executive producer and creator Seth MacFarlane (FAMILY GUY, "Ted") THE ORVILLE is a live-action, one-hour space adventure series set 400 years in the future that follows the exploits of The U.S.S. Orville, a mid-level exploratory spaceship. Its crew, both human and alien, face the wonders and dangers of outer space, while also dealing with the problems of everyday life. In the series' opener, it's 2417, and the Planetary Union promotes ED MERCER (MacFarlane) to Captain of the exploratory vessel The U.S.S. Orville. Ed's enthusiasm for his new position is dampened when his ex-wife, KELLY GRAYSON (Adrianne Palicki), is assigned to be his First Officer. While on their first routine mission, the Orville crew is ambushed by the Krill, a vicious alien race, who are bent on stealing a device that can cause time to accelerate in the all-new "Old Wounds" episode of THE ORVILLE, the first part of the two-night special series premiere airing Sunday, Sept. 10 (8:00-9:00 PM ET LIVE to all Time Zones), immediately following the NFL Doubleheader on FOX. (ORV-101) (TV-14 D, L, S, V)