Browse: Home / On Hiatus / The Orville / Season One / Majority Rule 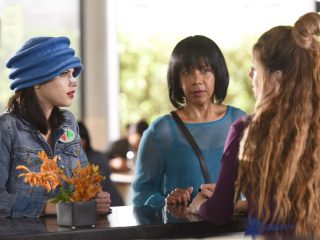 Written By:
Seth MacFarlane
Directed By:
Tucker Gates
Our Rating:

When a team goes in search of a pair of missing Union anthropologists on a planet at a twenty-first century level of development, Lt. LaMarr is arrested for committing a lewd act — putting his life into the hands of the planet’s public voting system.

ED AND THE CREW FACE THE MAJORITY ON AN ALL-NEW "THE ORVILLE" THURSDAY, OCTOBER 26, ON FOX

When two Union anthropologists go missing on a planet similar to 21st century Earth, Ed sends a team led by Kelly to find them, but the mission quickly goes awry when they realize the society's government is completely based on a public voting system to determine punishment in the all-new "Majority Rule" episode of THE ORVILLE airing Thursday, Oct. 26 (9:01-10:00 PM ET) on FOX. (ORV-107) (TV-14 D, L, V)