Browse: Home / On Hiatus / The Orville / Season One / About A Girl 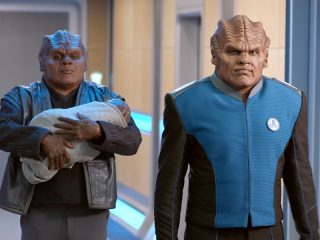 Written By:
Seth MacFarlane
Directed By:
Brannon Braga
Our Rating:

After Bortus and Klyden’s child is born female they request a controversial conformity surgery, prompting an ethical debate amongst the crew.

ED AND THE CREW FACE A MORAL DILEMMA AS THEY TRAVEL TO BORTUS' PLANET ON THE ALL-NEW, TIME PERIOD PREMIERE OF "THE ORVILLE" THURSDAY, SEPTEMBER 21, ON FOX

The Orville crew is divided between cultures when Bortus and Klyden debate if their newly born offspring should receive a controversial surgery in the all-new "About A Girl" time period premiere episode of THE ORVILLE airing Thursday, Sept. 21 (9:01-10:00 PM ET) on FOX. (ORV-104) (TV-14 L, V)