Browse: Home / On Hiatus / The Orville / Season One / Krill 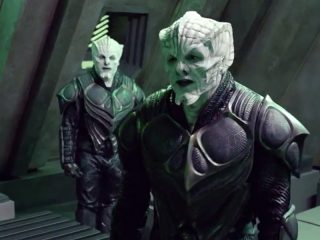 Written By:
David A. Goodman
Directed By:
Jon Cassar
Our Rating:

Captain Mercer and Gordon go undercover on board a Krill vessel in an attempt to learn more about their enemy’s religious beliefs, but find more than they expected when they discover the ship’s mission.

ED AND GORDON ARE SENT INTO ENEMY SPACE ON AN ALL-NEW "THE ORVILLE" THURSDAY, OCTOBER 12, ON FOX

After the Orville crew defeats a Krill attack on a brand-new colony, the Union sends Ed and Gordon on a dangerous undercover mission to infiltrate a Krill ship and obtain a copy of the Krill bible, the "Anhkana," to better understand the enemy in the all-new "Krill" episode of THE ORVILLE airing Thursday, Oct. 12 (9:01-10:00 PM ET) on FOX. (ORV-106) (TV-14 D, L, V)