Browse: Home / On Hiatus / The Orville / Season One / Command Performance 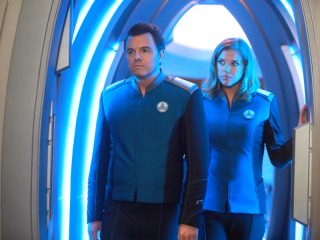 After the Captain and First Officer fall into an alien trap Alara is left in command of the ship, and must decide whether to put the crew at risk to rescue them. Meanwhile, Bortus is sidelined by family matters after he lays an egg.

ALARA MUST TAKE FIRST COMMAND ON AN ALL-NEW "THE ORVILLE" SUNDAY, SEPTEMBER 17, ON FOX

When Ed and Kelly are tricked by a hologram of a ship in distress and find themselves prisoners in a replica of their former home, Alara must step up in her first command of the Orville and attempt a heroic rescue. Meanwhile, Bortus and Klyden receive some happy, yet unexpected news in the all-new "Command Performance" episode of THE ORVILLE airing Sunday, Sept. 17 (8:00-9:00 PM ET/5:00-6:00 PM PT/LIVE to all Time Zones), immediately following the NFL Doubleheader on FOX. (ORV-103) (TV-14 D, L)