Browse: Home / On Hiatus / The Orville / Season One / Cupid’s Dagger 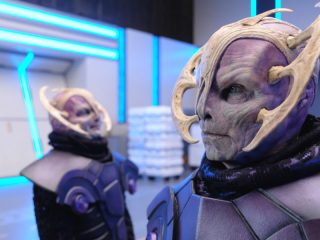 Written By:
Liz Heldens
Directed By:
Jamie Babbit
Our Rating:

With the Orville playing host to a pair of warring species Ed and Kelly are shocked when Darulio, the man Kelly cheated with, arrives to aid in the mediation. Meanwhile Yaphit declares his love for Dr. Finn.

LOVE AND TENSION IS IN THE AIR WHEN A FAMILIAR FACE BOARDS THE SHIP ON AN ALL-NEW "THE ORVILLE" THURSDAY, NOVEMBER 9, ON FOX

The Orville is called to mediate a peace treaty between two warring cultures, but tensions run even higher between Ed and Kelly when a familiar face boards the ship. Meanwhile Yaphit declares his love for Dr. Finn with surprising results in the all-new "Cupid's Dagger" episode of THE ORVILLE airing Thursday, Nov. 9 (9:01-10:00 PM ET) on FOX. (ORV-109) (TV-14 D, L, S, V)