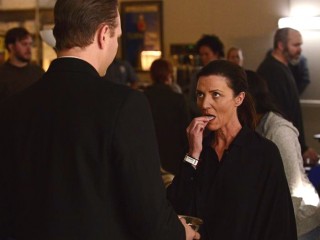 The Returned are inexplicably drawn to Rachel, suggesting a stronger connection between them than anyone had realized. Margaret gains an audience with the government agent who oversees the captive Returned, and Preacher James is brought in to try and calm the people inside the facility.

BELLAMY FEARS FOR RACHAEL AND HER UNBORN CHILD AFTER A SERIES OF INEXPLICABLE EVENTS, ON ABC'S "RESURRECTION"

"Steal Away" - After a series of inexplicable events, Bellamy fears for the safety of Rachael and her unborn child. Preacher James predicts that the baby's birth will unleash an ancient evil. Margaret rallies the Returned at the government facility and forms an uneasy alliance with Preacher James, and Bellamy's government contact (Donna Murphy) warns that something big is on the horizon, in the penultimate episode of "Resurrection," SUNDAY, JANUARY 18 (9:01-10:01 p.m. ET) on the ABC Television Network.