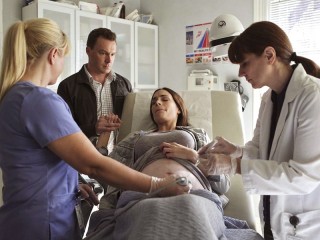 Written By:
Nicki Paluga
Directed By:
Constantine Makris
Our Rating:

With anti-Returned sentiment on the rise Tom’s church becomes a refuge for Returned being turned away by their families, and Fred looks for a group calling themselves the “True Living.” Margaret confronts Addison about his lineage, and Maggie may have found a way to combat the virus.

TENSION AND FEAR AMONGST THE COMMUNITY GROW AS THE VIRUS SPREADS AND THE TRUE LIVING GROUP BECOMES MORE EMBOLDENED, ON ABC'S "RESURRECTION"

"Forsaken" - Pastor Tom's new church is becoming a refuge for the Returned as fear and anti-Returned rhetoric intensifies. Bellamy and Sheriff Fred are determined to track down the True Living members and stop them from causing any more harm, and Maggie is on the cusp of finding a cure for the virus until the unimaginable happens - a frightening kidnapping and a horrible hate crime brings everything to a grinding halt, on "Resurrection," SUNDAY, NOVEMBER 30 (9:00-10:01 p.m. ET) on the ABC Television Network.