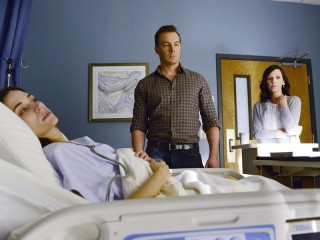 Written By:
Tony Basgallop
Directed By:
Colin Bucksey
Our Rating:

Rachael must decide whether to put her child at risk by taking the only treatment available for the virus, which also strikes a non-Returned. Deputy Carl is drawn into the anti-Returned hate group, and Brian Addison takes an interest in Margaret.

RACHAEL REFUSES TREATMENT, FEARING FOR HER UNBORN CHILD, AND THE VIRUS MAKES THE JUMP TO THE LIVING POPULATION, ON ABC'S "RESURRECTION"

"Miracles" - Rachael refuses treatment for the virus, fearing for her unborn child. The anti-Returned hate group True Living grows in numbers, including Deputy Carl. Elaine's brother Ray contracts the virus, despite the fact that he's living and not Returned. Brian Addison shows more than a passing interest in Margaret, on "Resurrection," SUNDAY, NOVEMBER 9 (9:00-10:01 p.m. ET) on the ABC Television Network.