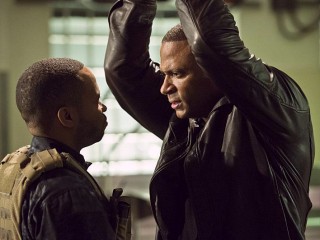 After Oliver and Felicity head out of town to learn how to stand up to Darhk’s magic, Diggle takes the fight against H.I.V.E. into his own hands — only to find himself taken captive by his brother Andy. Thea begins to suspect that her vacation with Alex is not entirely what it appears.

DIGGLE IS CONSUMED WITH GUILT AND SEEKS REVENGE