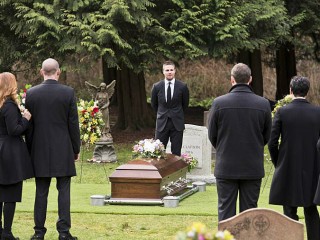 As the team struggles to come to terms with the loss of one of their own, Oliver searches for a woman who has stolen the Canary’s sonic device and is using it for her own ends.

Oliver (Stephen Amell) and the team struggle to come to terms with Laurel's (Katie Cassidy) death, especially Diggle (David Ramsey) who is overwhelmed with guilt for choosing to believe Andy (guest star Eugene Byrd) had changed. Meanwhile, Lance (Paul Blackthorne) refuses to believe his daughter is really gone and asks Nyssa (guest star Katrina Law) to help bring her back. A recent Black Canary sighting in Star City only seems to prove his theory that Laurel isn't actually dead.