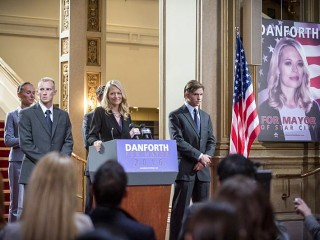 An old Queen family friend declares her candidacy for Mayor and immediately finds herself the target of an anarchist working with Damien Darhk. Oliver confronts Thea about her over-the-top behavior, and Felicity faces a cold reality when she returns to work as head of Palmer Technologies.

When an old family friend, Jessica Danforth (guest star Jeri Ryan), tells Oliver (Stephen Amell) and Thea (Willa Holland) that she is going to run for mayor, both Queens are concerned considering the last three mayors have been murdered. Despite their protests, Jessica makes her announcement so the Green Arrow and Speedy vow to protect her. Meanwhile, Thea begins to exhibit effects from the Lazarus Pit. In addition, Felicity (Emily Bett Rickards) is faced with a tough business decision and looks to one of her employees, Curtis Holt (guest star Echo Kellum), for help. John Behring directed the episode written by Marc Guggenheim & Keto Shimizu (#402).