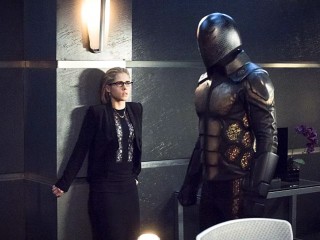 Bee drone maven Brie Larvan escapes from prison and comes after Felicity, demanding the cutting-edge chip that is implanted in her spine and putting Palmer Tech on lockdown. Team Arrow gets help from a new ally in their efforts to rescue Felicity, Thea, and Donna from the building.

Brie Larvan (guest star Emily Kinney) breaks out of jail and turns up at Palmer Tech threatening to kill everyone unless she gets the bio-chip that is implanted in Felicity's (Emily Bett Rickards) spine. When Oliver (Stephen Amell) realizes that Felicity, Thea (Willa Holland) and Donna (guest star Charlotte Ross) are trapped in Palmer Tech with everyone else, he looks to a surprising ally to help Team Arrow save the day.