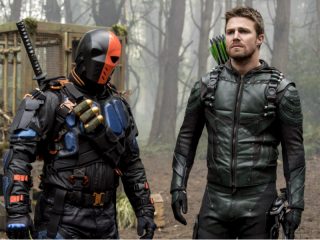 Oliver returns to Lian Yu and assembles a team of tenuous allies — including Slade Wilson, Merlyn, Nyssa, and Digger Harkness — to confront Chase and rescue his loved ones, who are being held captive on the island. Five years in the past, Oliver must survive a final confrontation with Kovar.