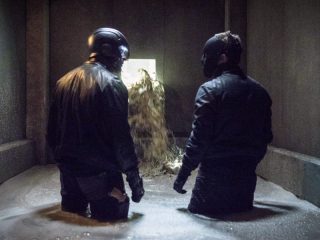 A mysterious delivery to the Mayor’s office implicates Oliver’s father in an unsolved murder, forcing him and Thea to consider the paths they are on. Rene debates whether his daughter will be better off without him, and in the past Oliver and Anatoly return to Lian Yu.

Oliver (Stephen Amell) returns to the mayor's office and faces one of his most pressing issues yet - the forced release of dozens of violent criminals prosecuted by Adrian Chase (Josh Segarra). Meanwhile, a crate is delivered to Oliver's office containing a mysterious corpse encased in concrete.