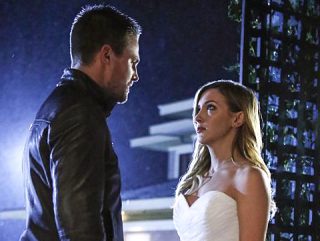 Held captive by the Dominators inside a shared dream, Oliver and the others awaken to an ideal life where the Queen’s Gambit never went down and Laurel never died — and where Diggle fights to protect the city as a vigilante called the Hood. Back on Earth, Flash and Supergirl join Team Arrow to retrieve technology needed to mount a resistance.

Oliver (Stephen Amell) wakes up to a life where he never got on The Queen's Gambit. Robert (guest star Jamey Sheridan) and Moira Queen (guest star Susanna Thompson) are alive and well. Laurel (guest star Katie Cassidy) is his loving fiancée and their wedding is imminent. Everything seems perfect, but Oliver starts to notice small imperfections that make him question this new reality. Meanwhile, Felicity (Emily Bett Rickards) and the recruits take on a new threat with help from The Flash (guest star Grant Gustin) and Supergirl (guest star Melissa Benoist).