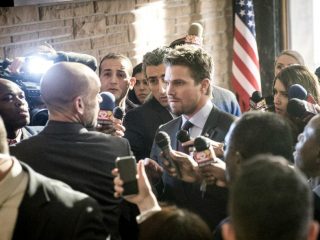 Oliver faces possible impeachment as Mayor after the cover-up of Detective Malone’s death is exposed, and must decide whether to allow someone else to take the fall for his actions. Convinced that the Mayor is corrupt, Vigilante targets Oliver directly — and Thea decides to play politics to help her brother.

Oliver (Stephen Amell) faces his biggest challenge yet as mayor. Felicity (Emily Bett Rickards) continues down her dark path with Helix. After Vigilante attacks Oliver while he's acting as the mayor, Diggle (David Ramsey) leads the team in a mission to stop Vigilante once and for all.