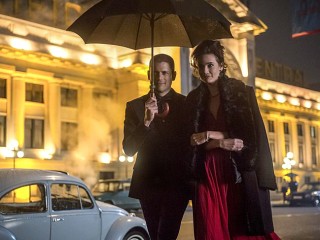 After infiltrating the Pentagon in 1986 the Waverider travels to Moscow, where Vandal Savage has sought asylum during the Cold War. While Ray and Snart attempt to romance a Russian scientist in order to learn their enemy’s next move, the Time Masters track down Rip and make him an offer.

When Vandal Savage (guest star Casper Crump) retreats behind the Iron Curtain in the early 1980s, a string of nuclear scientists begins to mysteriously disappear. The team follows Vandal's trail straight into the heart of the Soviet Union in an attempt to find his next target. Ray (Brandon Routh) tries to bond with a beautiful Soviet scientist, Valentina Vostock (guest star Stephanie Corneliussen), in the hopes of finding out Vandal's next move. When Valentina rejects him, it's Snart (Wentworth Miller) to the rescue. Stein (Victor Garber) pushes Jax (Franz Drameh) to be better, which frustrates Jax and ultimately threatens the Firestorm matrix. Rip (Arthur Darvill) asks Sara (Caity Lotz) to train Kendra (Ciara Renée).