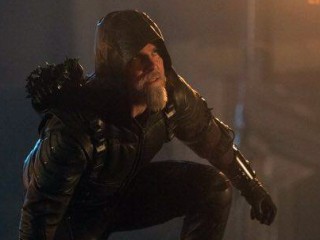 After the Waverider crash-lands in Star City in the year 2046, the team finds that the son of Slade Wilson has taken up the mantle of Deathstroke and brought about an apocalypse — where a new Green Arrow fights alone and a broken Oliver Queen sits in the shadows.

When a malfunction sends the Waverider crashing into 2046 Star City, our heroes face a startling version of their own future where they never stop Savage (guest star Casper Crump) and never return home. The city is in ruins and overrun by criminals, which thrills Rory (Dominic Purcell). Sara (Caity Lotz) is despondent over the destruction of her home and stunned when she learns what happened to her old friend, Oliver Queen (guest star Stephen Amell).