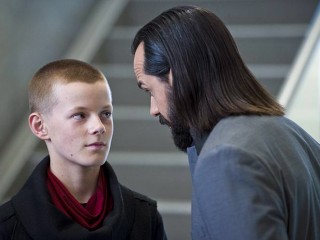 Rip takes the team to the future with the intention of taking one of Savage’s allies out of the timeline — who at this point in history is a 14-year-old boy destined to become an evil dictator. The team takes turns confronting their prisoner, and Kendra remembers a former life with Carter.

RIP CROSSES THE LINE IN HIS EFFORT TO SAVE HIS FAMILY

Rip (Arthur Darvill) tells the team they are headed to the future to take out a powerful ally that Savage (guest star Casper Crump) needs in order to conquer the world. However, when Rip reveals the ally is a 14 year-old boy (guest star Cory Gruter-Andrew) who will one day grow into an evil dictator, the team is split about the morality of killing a child, even if it does save the world. Meanwhile, Sara (Caity Lotz) talks Snart (Wentworth Miller) through a rough patch and Ray (Brandon Routh) learns something that could impact his future with Kendra (Ciara Renée).