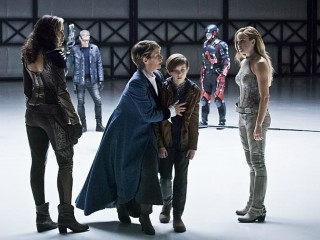 The team’s own lives are on the line when a time-traveling assassin called the Pilgrim targets their younger selves, forcing them to skip through time and remove themselves from history.

The team is targeted by The Pilgrim (guest star Faye Kingslee), a deadly assassin who wants to erase the Legends from the timeline by killing their younger, non-superhero selves. As a protective countermeasure, Rip (Arthur Darvill) decides Sara (Caity Lotz), Snart (Wentworth Miller), Rory (Dominic Purcell), Professor Stein (Victor Garber) and Jax (Franz Drameh) need to kidnap their past selves first before The Pilgrim gets to them. Coming face-to-face with the younger versions of themselves proves to be both a physical and emotional challenge for certain members of the team who would rather forget their past. Rip tells them he has a refuge for their precious cargo - an orphanage that raises future Time Masters and where he himself grew up.