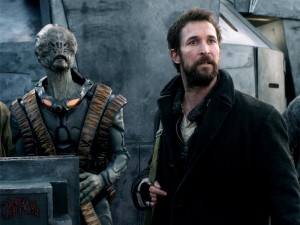 You want sci-fi on cable? TNT is gonna show you how to do sci-fi on cable. The show got more and more exciting with its third season in 2013, introducing the Volm and making one of their envoys — nicknamed “Cochise” — into a regular character. We got new recurring characters (Gloria Reuben’s Marina, and Robert Sean Leonard’s Dr. Kadar), a creepy new baby, a mole in the midst of the 2nd Mass, and at the end of the season dealt a major blow to the Espheni that put the enemy on the run.

This show continues to get better, though we’re a little worried that the producers have talked about having fewer sci-fi elements in Season Four. But we’ll watch anyway. 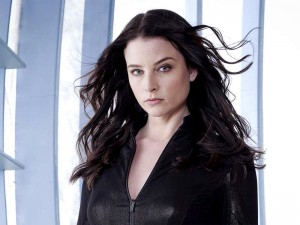 Continuing to prove that some of the best in genre television still comes from Canada, Continuum had a great season on Showcase and Syfy Channel in the spring. Liber8 is divided, Julian (a.k.a. “Theseus”) is slowly discovering his future destiny, and Alec has a girlfriend! A kick-ass girlfriend with a big secret that will tear them apart and shatter his heart into a thousand tiny pieces … but, hey, a guy has to start somewhere.

In 2013 Continuum went from a show that was mostly a present-day police procedural that happened to have a main character from the future, to a show that isn’t afraid to let the science fiction come out and play each week. Season Two also opened up Kiera’s big secret a bit, revealing her true identity to Carlos and introducing a number of new characters from the future — most importantly Mr. Escher (Hugh Dillon). Fans made Continuum our third biggest show. 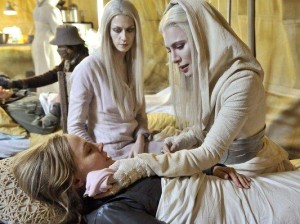 Five shows on our Top 13 list made their debut in 2013, and ahead of them all was Syfy Channel’s very ambitious Defiance. Airing 13 episodes in the spring, the show took the cable channel back into the realm of pure science fiction in a story set on a terraformed Earth, where humans live together with the various races of the alien Votans.

Defiance shows promise. We wish we could say more than that, one year in. For a series this big, this ambitious, and this expensive, we wish that the writers would take more risks, develop plotlines and characters faster, and not waste a single minute of their 13 episodes per year.