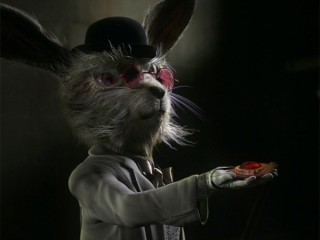 It’s a bumper crop of science fiction and fantasy series this year, with four of the five broadcast networks adding to their offerings.

CBS remains a sci-fi-free zone in the scripted drama department (though, as we noted earlier this week, Person of Interest comes close). We are keeping an eye on the mid-season newcomer Intelligence, starring LOST‘s Josh Holloway as an operative with a super-computer microchip in his brain that gives him instant access to the worldwide information grid. It sounds like sort of an action-drama version of Chuck, which we were also never convinced was really a sci-fi show on a week-to-week basis.

John Billingsley (Star Trek: Enterprise) co-stars as the designer of the tech, and René Echevarria (Star Trek: Deep Space Nine, Terra Nova) is on the list of executive producers.

But each of the other U.S. broadcast networks have doubled-down on their genre shows for the 2013-2014 season.

FOX bid farewell to both of its sci-fi shows, but is adding two new series for the upcoming season. NBC adds one (we’re ignoring Dracula, for now), ABC has two high-profile additions plus a mid-season drama, and The CW declares that it is the place to be for science fiction and fantasy fans by renewing its entire line-up and then adding four more.

Here’s the complete list of new pick-ups, by network. Note that some of these will be more sci-fi than others: Almost Human is set in the future and has an android as a main character, while a show like Resurrection has a fantastic twist that sets up its premise … but may or may not actually look like a genre show in its week-to-week storytelling. Time will tell just how firmly planted in the genre some of these are.

Stay tuned to SciFi Stream in the days ahead — we’ll take a closer look at each of the new shows, including the first trailers!

Agents of S.H.I.E.L.D. (Tuesdays, 8/7c).  One of the most hotly-anticipated new shows of the season is set in the world of Marvel’s Avengers, and created by Joss Whedon.  The TV series follows the agents of the government agency S.H.I.E.L.D. when the world’s superheroes (Ironman, Hulk, Captain America, Thor, etc.) are not around.  Led by a resurrected Agent Coulson (Clark Gregg), the group investigates the unclassified cases of people with emerging superpowers, as well as other mysteries.  Watch the amazing first preview here.

Once Upon A Time In Wonderland (Thursdays, 8/7c).  After two successful years with Once Upon A Time, ABC is giving the show a spin-off set in the storybook Wonderland.  It follows Alice (Sophie Lowe), who begins in an insane asylum in Victorian London — telling stories of her visits to an amazing world populated by hookah-smoking caterpillars, invisible cats, evil queens, a talking rabbit, and more.  When Alice learns that her lost love is still alive, she escapes the asylum and returns with the Knave of Hearts and the White Rabbit to new adventures in Wonderland.

Resurrection (Starts Mid-Season). Formerly titled The Returned, Omar Epps (House) stars in this series about the town of Arcadia, Missouri, where loved ones who have died in years past suddenly start returning — alive and well, and without having aged. It starts with a young boy found in China, who Epps’ character returns home only to learn that the boy had died more than 30 years earlier.

Almost Human (Mondays, 8/7c – Starts Late Fall).  Karl Urban (Star Trek) and Michael Ealy star in this futuristic drama about an LAPD officer partnered with an artificial life form.  It’s another show from J.J. Abrams and friends, and looks to be one of the fall’s best new genre shows.  Read more and watch the trailer here!

Sleepy Hollow (Mondays, 9/8c – Repeats Fridays, 9/8c).  Ichabod Crane is ripped through time 250 years into the present day, where he teams up with a female cop and uses his knowledge of the secrets of American history and the founding fathers to solve the mysteries of the town of Sleepy Hollow.  But also pulled into the present day is his nemesis: the Headless Horseman, who is revealed to be one of the mythical Four Horsemen of the Apocalypse described in the Book of Revelation.

Believe (Sundays, 9/8c – Starts Mid-Season).  Also from Abrams’ team is this drama about a young girl named Bo, who has all sorts of extraordinary abilities — levitation, telekinesis, the ability to control nature, and even predict the future.  All her life Bo has been quietly cared for by a small group called “True Believers,” but now that she is reaching puberty her powers are growing stronger — and there are people who want to find her and use her for their own interests.  To protect her the Believers choose Tate, a wrongly-convicted death row inmate, who they spring from prison.  Tate and Bo are on the run, and he begins to learn her true significance as they touch the lives of the people they meet.

The 100 (Starts Mid-Season). It’s a post-apocalyptic future, 97 years after a worldwide nuclear war. Now the Powers That Be at the Ark space station are sending 100 juvenile delinquents back to a decimated Earth to investigate the possibility of resettling the planet. It looks like the show — the CW’s most solidly sci-fi offering — will include both the planet-side and the space station. The cast includes LOST‘s Henry Ian Cusick and Grey’s Anatomy‘s Isaiah Washington.

The Originals (Tuesdays, 8/7c). The much talked-about spin-off of The Vampire Diaries is set in New Orleans, where the original clan of vampires lives it up. Last month’s episode set up the new series, which will follow the characters Klaus (Joseph Morgan), Elijah (Daniel Gillies), and Rebekah (Claire Holt).

Star Crossed (Starts Mid-Season). Originally titled Oxygen, this is the story of a high school girl who falls in love with an alien boy. He’s part of a group of refugees who came to Earth years ago. His people have been treated with suspicion, but are now being integrated into society — including schools.

The Tomorrow People (Wednesdays, 9/8c). It’s a remake of the classic 1970s British series about a team of evolved humans who use their abilities to help people and fight crime. It will be interesting to see how The Tomorrow People distinguishes itself from similar shows, including Heroes, Alphas, and newcomer Agents of S.H.I.E.L.D.

What Didn’t Make the Cut? Remarkably, the vast majority of science fiction and fantasy pilots in contention this year have made it to series. Dead shows include The CW’s The Selection, NBC’s comic book adaption The Sixth Gun, and FOX’s Delirium. ABC also had a Mad Hatter spin-off under consideration before it decided to go with the Alice-centric Wonderland instead.

Finally, the CW is going back to the drawing board with its Wonder Woman show Amazon, tapping Heroes writer Aron Eli Coleite to pen a new script.